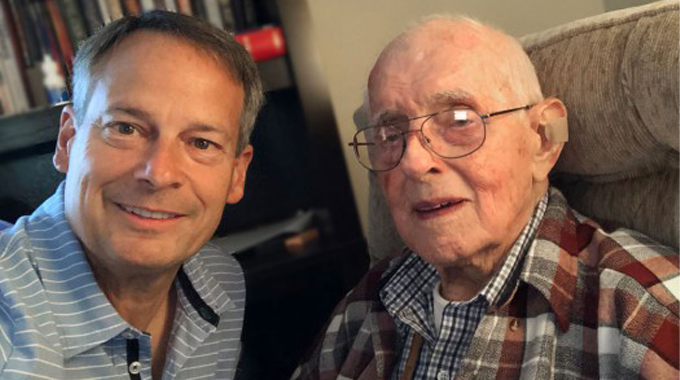 Volunteer Tom Ciha began visiting an Ohio’s Hospice LifeCare patient named George at a local nursing home about six months ago. George was 96 years old and was diagnosed with end-stage heart disease. He also had Alzheimer’s disease, but his cognitive decline had not progressed to the point where it impeded his social abilities. George and Tom immediately gravitated to one another. They had wonderful conversations. On his first visit, and every visit thereafter, George told Tom the story of his relationship with a young financial advisor named Walter.

Decades earlier, Walter had assisted George in setting up part of his retirement income to benefit an orphanage in India. The process was complicated and took quite a bit of time and effort. George and Walter became fast friends. Every week when Tom visited George, George would say, “I sure wish I could talk to Walter one more time.” It turned out that the Walter in question was Walter Bettinger, the CEO of Charles Schwab Financial Services.

Tom felt he needed to try to contact Walter to see if he would be willing to give George a call. He didn’t want to tell George what he was planning, because Tom was afraid that he wouldn’t actually be able to reach the man, or that the memory of their association would not be as important to Walter as it was to George. But Tom felt he needed to try, so he wrote a letter.

Tom put the letter in the mail on a Tuesday. It reached Walter at Charles Schwab headquarters in San Francisco on a Thursday. On Friday, Walter flew from San Francisco to Cleveland, rented a car, and drove to Wooster to see George. Walter probably had a few other things on his calendar that Friday. But it seems none were as important as seeing George again.

George and Walter spent the day together. They talked for hours. George told Tom that Walter knelt at his bedside and prayed with him.

When George died, Tom texted Walter to tell him of George’s passing. Walter texted back, “This morning, God welcomed into his arms one of his most deserving servants.”

Ohio’s Hospice LifeCare Offers Bereavement Workshop on Living Losses: Facing the Addiction of a Loved One

Reflections on Being a Hospice and Palliative Care Nurse

As we celebrate Nurses Month throughout the month of May, we are recognizing nurses for…

Recent Posts
© Copyright 2022 Ohio's Hospice, Inc. The logo and icon are registered trademarks of Ohio's Hospice, Inc. All rights reserved.
Back To Top
We use cookies on our website to give you the most relevant experience by remembering your preferences and repeat visits. By clicking “Accept All”, you consent to the use of ALL the cookies. However, you may visit "Cookie Settings" to provide a controlled consent.
Cookie SettingsCookie PolicyAccept All Cookies
Manage consent

This website uses cookies to improve your experience while you navigate through the website. Out of these, the cookies that are categorized as necessary are stored on your browser as they are essential for the working of basic functionalities of the website. We also use third-party cookies that help us analyze and understand how you use this website. These cookies will be stored in your browser only with your consent. You also have the option to opt-out of these cookies. But opting out of some of these cookies may affect your browsing experience.
Necessary Always Enabled
Necessary cookies are absolutely essential for the website to function properly. These cookies ensure basic functionalities and security features of the website, anonymously.
Functional
Functional cookies help to perform certain functionalities like sharing the content of the website on social media platforms, collect feedbacks, and other third-party features.
Performance
Performance cookies are used to understand and analyze the key performance indexes of the website which helps in delivering a better user experience for the visitors.
Analytics
Analytical cookies are used to understand how visitors interact with the website. These cookies help provide information on metrics the number of visitors, bounce rate, traffic source, etc.
Advertisement
Advertisement cookies are used to provide visitors with relevant ads and marketing campaigns. These cookies track visitors across websites and collect information to provide customized ads.
Others
Other uncategorized cookies are those that are being analyzed and have not been classified into a category as yet.
SAVE & ACCEPT
Powered by