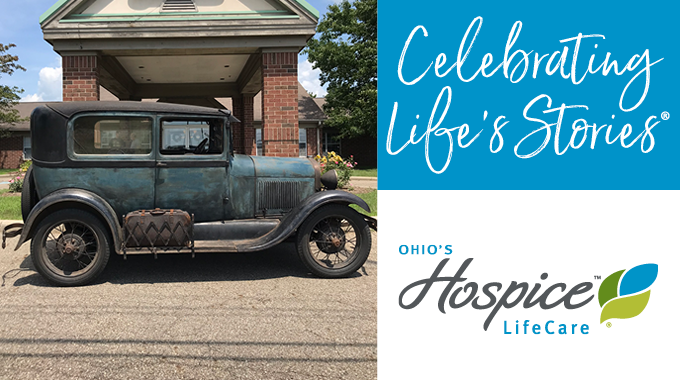 When Brian Revak finally bought his dream unrestored Ford Model A, he began a journey to learn the history of the car and meet the people who had owned it before him. That journey connected him with Freada Hoover, an Ohio’s Hospice LifeCare patient, who owned the car 50 years ago.

Freada and her husband, William, were a car-loving duo who owned Bill’s Speed Shop in Navarre, Ohio. The couple raised their daughters, Mary Rohr-Pruner and Elizabeth Hoover-Miller, to have an appreciation of cars.

In 1966, William bought Freada an unrestored 1928 Ford Model A — a car she had wanted and dreamed of owning.

“Mom was never one for jewelry, but she loved the Model A, and dad bought her one,” Mary said. “Most 8-year-olds are out playing games, but Dad was showing me how to build a Holley carburetor in the shop.”

William died nine years ago, and as Freada’s health and memory started to decline, she made the decision to sell the Model A to a buyer in North Lawrence, Ohio. After only a year, the car was sold again, this time to Brian.

Brian learned the previous owner had found the Model A in a barn, and took several trips to the house next door — where Mary eventually answered and discovered that Brian now had her mother’s old Model A.

Brian was encouraged by his own mother, who works for a hospice in Youngstown, to reach out to Ohio’s Hospice LifeCare to give Freada an opportunity to be reunited with the car.

“I was curious to learn more about the car,” Brian said. “I didn’t know what to expect from the visit, but I felt good that I was able to reunite her for the afternoon.”

On a Saturday morning, Brian took a three-hour drive for a visit with Freada to show her the Model A. Freada and her daughters were able to take a look at their Model A and reminisce on memories of the car.

“My sister and I were thrilled that Brian has the car and took the time to come meet Mom,” said Mary. “He got to do something on his bucket list and was full of joy in being able to reunite her with it. His love for the Model A is beyond belief. We could not have picked a better person to have this car if we’d taken applications. It’s truly a love story between a man and his car.”

“It’s funny how life eventually connects us all together in such different stages of life,” Sarah said. “It shows such humanity and love on Brian’s part to see how this car affected his life in such a way he sought out Freada and her family to connect them to the car again. A loving and precious moment from the past, that was a gift from her husband, came back to visit her in the present from a complete stranger.”

Ohio’s Hospice LifeCare Offers Bereavement Workshop on Living Losses: Facing the Addiction of a Loved One

Thanks to Friendtique for Supporting Our Mission

Special thanks to Friendtique, a not-for-profit thrift boutique, located in downtown Wooster. In the past…

Since its founding in 1982, Ohio’s Hospice LifeCare has offered grief support services to the community. Now,…

Recent Posts
© Copyright 2022 Ohio's Hospice, Inc. The logo and icon are registered trademarks of Ohio's Hospice, Inc. All rights reserved.
Back To Top
We use cookies on our website to give you the most relevant experience by remembering your preferences and repeat visits. By clicking “Accept All”, you consent to the use of ALL the cookies. However, you may visit "Cookie Settings" to provide a controlled consent.
Cookie SettingsCookie PolicyAccept All Cookies
Manage consent

This website uses cookies to improve your experience while you navigate through the website. Out of these, the cookies that are categorized as necessary are stored on your browser as they are essential for the working of basic functionalities of the website. We also use third-party cookies that help us analyze and understand how you use this website. These cookies will be stored in your browser only with your consent. You also have the option to opt-out of these cookies. But opting out of some of these cookies may affect your browsing experience.
Necessary Always Enabled
Necessary cookies are absolutely essential for the website to function properly. These cookies ensure basic functionalities and security features of the website, anonymously.
Functional
Functional cookies help to perform certain functionalities like sharing the content of the website on social media platforms, collect feedbacks, and other third-party features.
Performance
Performance cookies are used to understand and analyze the key performance indexes of the website which helps in delivering a better user experience for the visitors.
Analytics
Analytical cookies are used to understand how visitors interact with the website. These cookies help provide information on metrics the number of visitors, bounce rate, traffic source, etc.
Advertisement
Advertisement cookies are used to provide visitors with relevant ads and marketing campaigns. These cookies track visitors across websites and collect information to provide customized ads.
Others
Other uncategorized cookies are those that are being analyzed and have not been classified into a category as yet.
SAVE & ACCEPT
Powered by